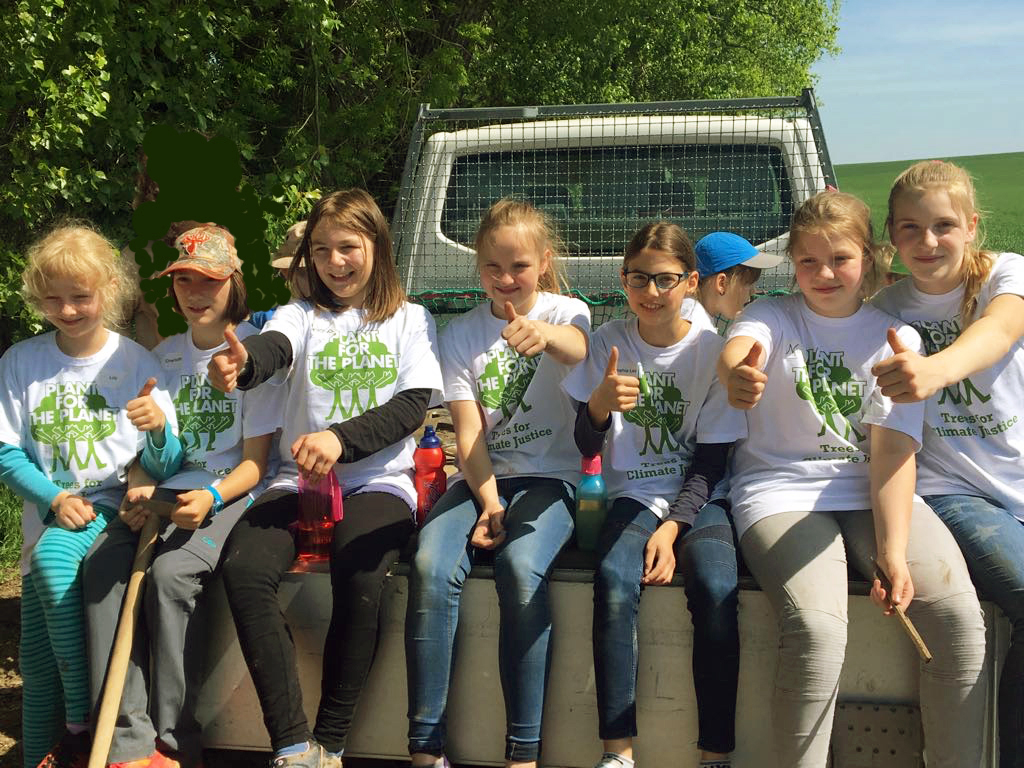 On 5 May the international initiative Plant-for-the-Planet and QUNDIS held their third day of action on behalf of the environment. Around thirty children attended the event on the company premises of the manufacturer of metering equipment in Erfurt. They received information about climate change, some training in making public presentations, were able to plan environmental conservation projects together and then planted 70 trees.

Everybody was looking forward to the occasion: the kids and their parents waited with keen anticipation for the start of the Children’s Academy with its motto “Stop Talking – Start Planting“. After they had been welcomed, the children attentively listened to presentations by Janick, Mara and Charlotte – all of them Plant-for-the-Planet ambassadors for climate justice. The kids were provided with interesting information on climate change and environmental protection. After that they divided up into groups and in an entertaining way learned the most important facts relating to the subject of climate justice.

After that they were given some coaching in making presentations, and developed their initial shared environmental protection projects. In the afternoon the group then went off to plant trees. In a woody area near to Erfurt-Vieselbach they planted 70 trees aimed at protecting the climate, including bird cherry, field maple and European rowan trees. The tree-planting operations received active support from the Erfurt department of parks and cemeteries.

“Environmental protection and sustainability are established components of our corporate philosophy. Part of our commitment is providing young people with an informed attitude in relation to the environment. It’s important for them to think about the subjects of climate change and energy efficiency,“ states Axel Müller, Director Marketing and Sales at QUNDIS GmbH.

At the end of the Children’s Academy all the young participants were nominated ambassadors for climate justice and received a certificate. In addition they were provided with interesting information material, T-shirts and books on the subject of climate protection, so that they can get their fellow pupils and friends interested in the idea. The next Children’s Academy organised by Plant-for-the-Planet and QUNDIS will be taking place in 2019.

Plant-for-the-Planet, the initiative for young people, has its origins in a school presentation given in January 2007 by Felix Finkbeiner, who was 9 at the time. At the end of the presentation Felix expressed the vision that in every country on earth children could plant a million trees in order to offset the world’s CO2 emissions. In the years which followed Plant-for-the-Planet developed into a worldwide movement: today more than 100,000 children in over 100 countries are engaged in the campaign for an overall reduction in CO2 emissions and for climate justice in terms of the fair distribution of emission rights among all nations. The children themselves become actively involved by planting trees – in Germany the one million mark has already been exceeded. Together with the United Nations Environmental Programme (UNEP) more than 14 billion trees have already been planted worldwide. Every tree captures CO2 and is at the same time a symbol of climate justice. Plant-for-the-Planet enjoys a high level of recognition, both domestically and internationally. The patrons of this initiative for young people are Prince Albert II of Monaco and former director of UNEP Klaus Töpfer.

QUNDIS GmbH is a subsidiary of the noventic group, and is among Germany’s most successful suppliers of metering devices and systems for the recording and billing of heat and water consumption. In Erfurt the company manufactures products such as heat cost allocators, heat meters and water meters under the label “Made in Germany”. Its customer base includes metering services, OEM partners and the housing industry. Innovation is a central component of the QUNDIS corporate philosophy, which was confirmed at Germany’s 2016 SME Summit when the Erfurt company was awarded the TOP 100 Prize as “Innovator of the Year”. The QUNDIS systems for remote meter reading, which also include smoke alarms, are in use in over 6 million homes in over 30 countries.